This is the second in a series of blog posts about researching and rewiring Christmas lights to work with Arduino devices.

The first snag I have hit is the control box for the GE lights. As shown in the photo below, they use triangular screws, and I don’t have bits for those. 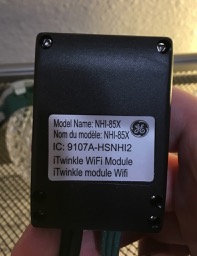 Triangular bits for these are hard to find — they usually are part of some 50-bit set and even them it is hard to tell if they are the right size before ordering. While I could try to force the screws using a slotted screwdriver, I really should be using the proper tool.

As for the HC lights, I was able to pop open the remote and find something interesting. 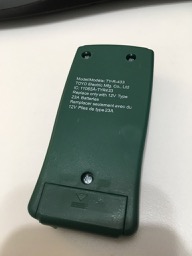 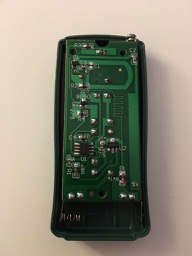 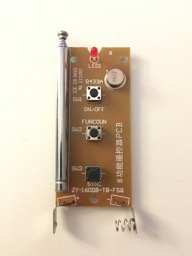 One way to find the frequency used would be to measure the antenna, but even easier is the R433A component. Looking online I found the datasheet, and it is a surface-acoustic-wave (SAW) resonator that operates at 433.920 MHz. Great!

This means I could get a 433.920 MHz transmitter/receiver for Arduino and determine the signal needed to control the HC lights controller box. After determining the signals using a receiver, I could try using a transmitter to repeat those signals and the secondary project will be close to complete.

And here is my preliminary plan, which will be changing as I figure things out.

Current problem: I don’t have any Arduino radio boards