This is the sixth in a series of blog posts about researching and rewiring Christmas lights to work with Arduino devices.

I know this series of posts have been talking about Arduino devices. But I have been thinking about how to best remotely control the Home Collection RF lights and setting up an Arduino with both the RF transmitter and WiFi seems to be more work than I actually need to do. 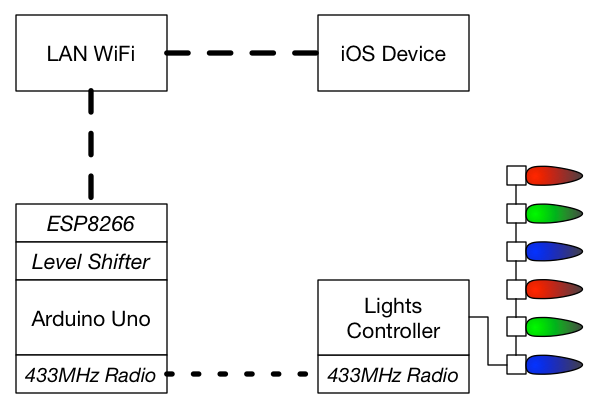 But what about a Raspberry Pi instead? I am already using one as a mini home server, and it has GPIO pins with both 5V and 3.3V. Can I connect the 433MHz transceiver to it and control the lights from Raspbian?

I connected the transmitter to the Pi as follows: 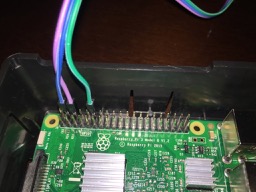 Next I booted up the Pi and set up a Ruby script to test the radio.

Even with the lights outdoors, the range from the Raspberry Pi is about 10 – 15 metres and works fine. If I need better transmission or range the modules have a hole for an antenna.

Next I expanded the Ruby script into a gem/library where code tables and so on are in their own classes. By turning it into a gem, I can then control the lights either using a command line interface or integrate it with other Ruby frameworks such as Sinatra or Rails.

The next step I want to tackle is creating a tiny web server to remotely control the lights on my home network — a simple web page that can issue the commands. Afterwards I will try to integrate it with homebridge and control the lights via Siri.